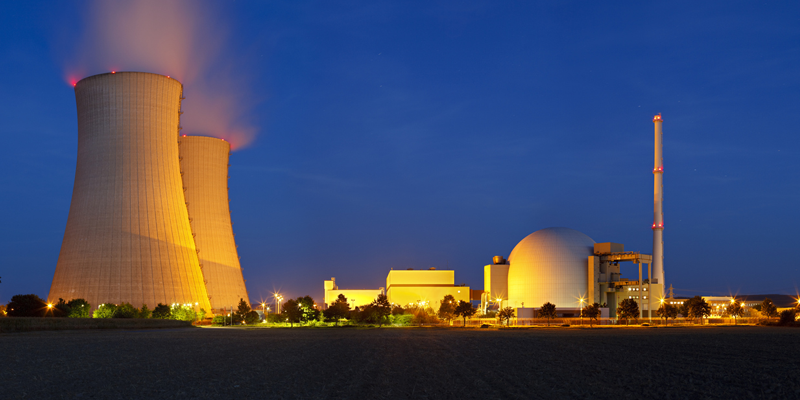 In a low-carbon world, nuclear power could have a healthy future - but hiring managers shouldn’t take the stability of the nuclear workforce for granted.

The nuclear power industry has had its share of controversies in the last decade. However, as we enter the 2020s, the sector has a new sense of optimism about its role in a low-carbon world - helping meet rising demand for electricity while reducing carbon emissions and air pollution.

According to the World Nuclear Association, there are currently around 55 reactors under construction worldwide, with another 400 either on order, planned, or proposed.

Many others will have their capacity increased or plant lifetimes extended. Moreover, a 2019 report from the International Energy Agency said nuclear power production would need to increase 80% by 2040 to meet global sustainability targets.

One of the challenges that will arise from all this new activity is the issue of talent. The nuclear power industry relies heavily on skilled workers such as engineers, project managers and security and compliance officers. And, while the sector has long benefited from a stable workforce - nuclear power is still considered a “job for life” - this may well be something that hiring managers and HR departments won’t be able to take for granted for much longer.

The 2020 Global Energy Talent Index (GETI) report - a survey of almost 21,000 energy industry professionals compiled by Airswift and Energy Jobline - sheds light on some of the emerging challenges for hiring managers in the nuclear power industry. Read on to find out more.

Get more energy recruitment insight in the full report.

1. Demographic challenges for the nuclear industry

The nuclear power workforce has historically been a stable one. Employees stay in their jobs for longer than in other energy sectors, and pay increases are incremental rather than dramatic. 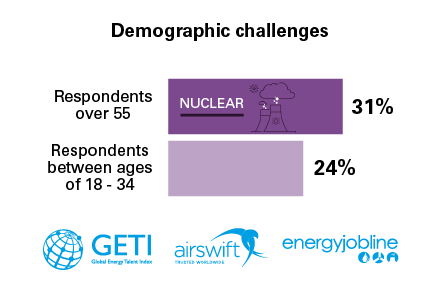 However, data from the 2020 GETI report also shows - not for the first time - that nuclear power also has an older workforce than most energy sectors.

Unless hiring managers do more to prioritise younger employees - both in terms of attraction and retention - they could face a dwindling talent pool when planning the next generation of nuclear power projects.

Training and career progression will be key, and companies shouldn’t take for granted that younger employees will share the same attitudes and values that characterised the workforce in the past. 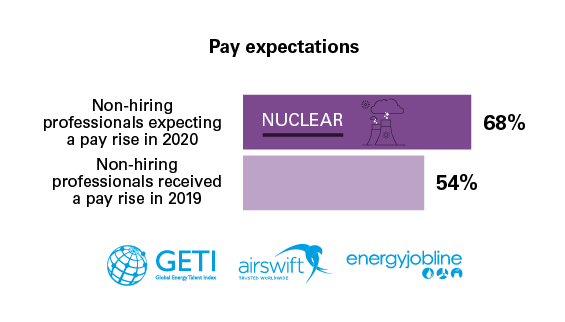 An optimistic outlook for the nuclear power industry means employees are getting more bullish about remuneration.

Unless hiring managers and HR departments react to this trend, they may risk a loss of talent. This could be to competitors both in nuclear power or other sectors where salaries and day rates are on the rise.

That said, it’s important to note that pay isn’t the only factor our survey respondents said would sway them when it came to changing jobs or sectors.

Our research shows there are clear opportunities across the energy industry for companies to improve employee attraction and retention with better career progression.

Nuclear power is no exception. 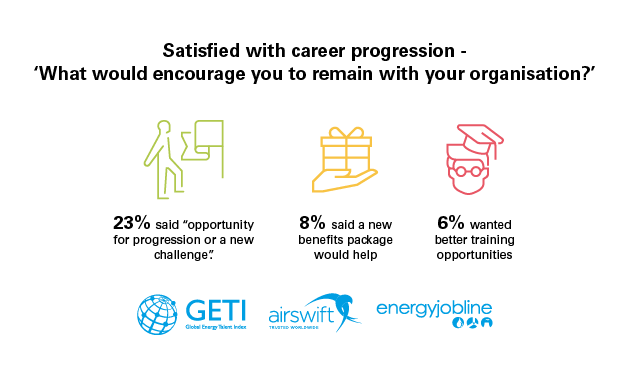 When asked “what would encourage you to remain with your organisation?”, some 23% of workers in the sector said “opportunity for progression or a new challenge”. This was far above those who said a new benefits package would help (eight per cent) or who wanted better training opportunities (six per cent). 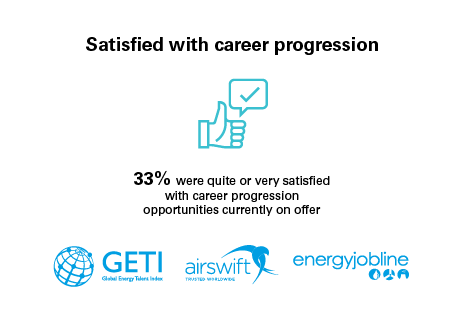 However, just 33% of nuclear power employees said they were either quite or very satisfied with the career progression opportunities currently on offer at their organisation. In contrast, the average across all energy sectors was 42%.

As competition for talent increases, companies in nuclear power need to pay attention to this shortfall and ensure they offer real, tangible progression to the next generation of energy employees.

4. A training disconnect in the nuclear sector?

77% of workers in the sector report having access had to training in the past 12 months, and a full 49% say this was instructor-led and classroom-based (their preferred method of training) compared to just 33% across all sectors.

However, our research also shows a potential disconnect between the focus of the training delivered and the full spectrum of areas where trainees wish to learn.

Just seven per cent of workers said they were trained on subjects outside the remit of their role and only ten per cent were given guidance on future career progression. GETI also found that leadership development programmes and practical hands-on activities were under-provisioned compared to other sectors.

By taking more notice of training requirements, the nuclear power industry may find this is a key opportunity to improve return on investment into talent.

5. Nuclear - less willing to relocate than other energy sectors? 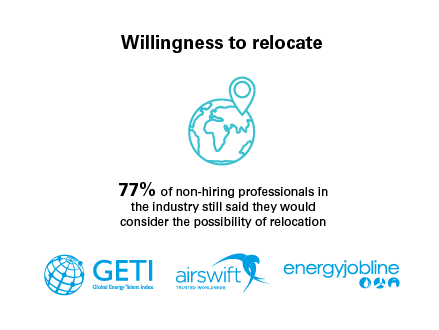 Nuclear power employees are typically less inclined to move to other countries for work than their peers in other sectors.

However, almost four-fifths (77%) of non-hiring professionals in the industry still said they would consider the possibility of relocation, and - with plenty of exciting projects lined up across Asia and the Middle East - hiring managers should be prepared for a globally mobile workforce in 2020.

In terms of the most desirable locations for work, North America and Europe topped the list (cited by 23% of respondents). However, the Middle East wasn’t far behind (22%) - which suggests there’s a growing buzz around the region’s fledgling nuclear power industry.

In general, if the sector grows as expected, many more countries outside of Western Europe, North America and Asia could build out nuclear capacity in years to come - potentially leading to more mobility opportunities for the workforce.

Find out more in the 2020 GETI report

Find out more about the top energy recruitment trends for 2020 and beyond. Click below to download your copy of the 2020 GETI report.

This post was written by: Kim Davies, Recruitment Consultant for Europe and Africa

Get more energy recruitment insight in the 2020 GETI report 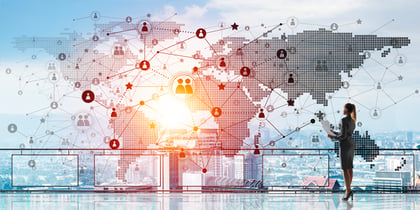 How can offshore wind benefit from transferable skills within oil and gas?

There are many transferable skills from oil & gas that can be used by the offshore wind industry. Find out how to explore these new opportunities. 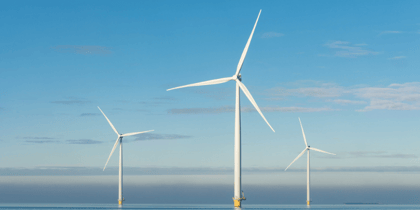 What do industry leaders think the energy workforce will look like post-pandemic? Will we see a shift in working practices following COVID-19? 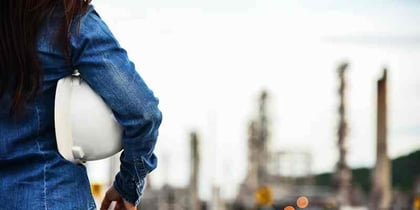