How do I protect against wildlife?

Depending on your workplace environment, it is important to learn the different types of wild animals and insects you may encounter and what actions you should take if you encounter them.

First and foremost, follow these basic safety rules should you encounter wildlife or any species you are unfamiliar with:

What should I do if I see an alligator?

Do not feed alligators

This is the most important rule because feeding alligators threatens the safety of both people and animals. Feeding only makes them bolder and encourages them to seek out people. Do not feed other animals inhabiting waters with alligators as this food source also attracts the alligators and trains them to associate humans with food.

Although they may look slow and awkward, alligators are extremely powerful and can move in bursts of speed on land over short distances. It highly unlikely to be chased by an alligator, but as a precaution, a safe distance at about 60 ft (18 m) should be maintained. If the alligator hisses or lunges at you, you are too close.

Do not touch alligators

If you see an alligator on the move, leave it alone and let is pass through. Do not attempt to move alligators out of the road. Alligators move the most in spring and summer when they are breeding.

Do not attempt to come close or touch an alligator nest, eggs, or small alligators.

What should I do if I see a snake?

Snakes can be found on every continent except for Antarctica, in various types of area, including forests, deserts, swamps, and grasslands. Texas alone is home to over 76 species of snakes. It's important to be informed and safe. While the behaviour of snakes is not 100% predictable, you can minimise your changes of being bitten by taking several basic precautions.

This is the number one rule for snake safety. 99% of snake bite cases occur when people attempt to catch, pick up, or kill snakes. If you are qualified to pick up/transport a snake, bring a snake trap and use specialty snake handling tools. Do NOT attempt to kill snakes. If you find a dead snake, be careful. Dead snakes still might have reflexes and can still bite you if you're not careful. Many snakes are sloth-like during the daytime and are quite skillful at keeping completely still - it's how they catch their prey.

Be aware of your surroundings 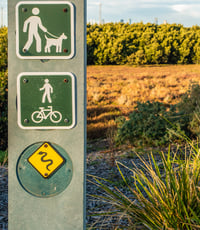 Many snakes hide in grassy areas and heavy underbrush. If you're able, avoid tall grass and stay along trails so you can see clearly what you're stepping on. If you have to go off trail, be attentive so you do not step on a sleeping rattlesnake. If you must go through tall grass, carry a stick and use it to probe the ground in front of you. Remember, there are always exceptions to the rule, and a snake could very well be curled up in the middle of a well groomed trail. Snakes can also climb and slither up trees and bushes. Most people never imagine they'll see a snake at eye level and are thus quite vulnerable to an aerial attack.

Check before you put your hand into a crevasse

Snakes like to hide out in the dark. Holes, a hollow log, or a crevasse in a rock are perfect places for a snake to hide. Before you stick your hand in a crevasse, check to make sure there isn't a snake or other critter in there. 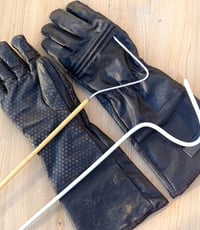 If you know you are going to be working in an environment prone to snakes, make sure to wear the proper clothing to protect yourself. Wear gloves at all times. Even if you do not intend to interact with a snake or if you know the snake is non-venomous, do not remove your gloves because they can still cause injury, bacterial infection, or hemorrhaging due to the anticoagulant in snake saliva. Protect your eyes. Always wear glasses or protective eye wear. Spitting Cobras are common encounters and they tend to aim for the eyes. Wear heavy boots and pants. If you're going to be outside, make sure your lower extremities are protected. Heavy boots and pants not only protect against fierce snakes but also ticks.

If you're in snake country, your best defense is alertness. Not all rattlesnakes rattle or coil before striking. Keep your eyes moving, look where you step, and never pick something up off the ground before assuring yourself there isn't a snake under it or in the nearby brush. Use a stick to poke around. Don't step blindly over logs or boulders and take a good look around before you sit down. 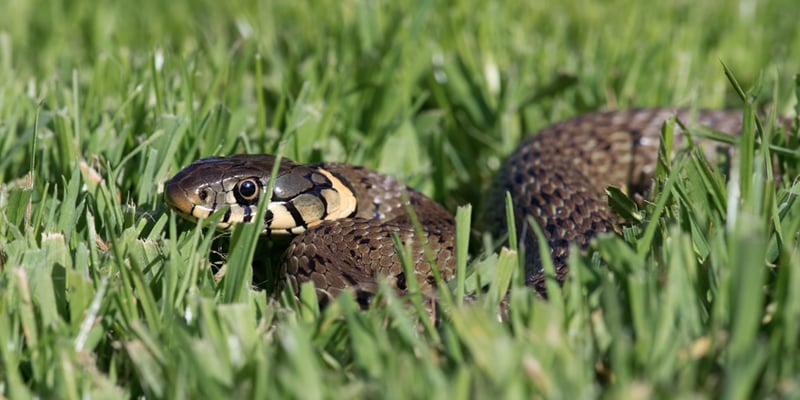 What should I do if I get a snake bite?

Knowing how to treat a snakebite can save a life. Snakebites are terrifying, so knowing how to react confidently can help prevent the natural reaction to panic. Follow these steps in order to give a snakebite victim the best opportunity for recovery:

Snakes, unlike bees, are capable of inflecting multiple bites, so be sure to verify that the snake has retreated. Also, be aware that snakes sometimes reside in groups, so ensure no other snakes are in the area to keep the victim and everyone else out of danger. If the snake is still nearby or in a defensive position, it is best to try and move the victim from the area before taking any further actions.

If possible, attempt to identify any characteristics of the snake or ask the victim what they can identify about the snake. If no one saw the snake do not attempt to locate it as this could result in more bites. Knowing the size, shape, and color of a snake can help medical professionals treat the bite more effectively, but getting this information is not worth exposing anyone to more bites.

Keeping a snakebite victim calm can be challenging, but it is important since keeping them calm can slow the spread of the venom and can prevent them from going into shock. Reassure the victim and make sure they are comfortable.

After someone is bit by a snake, contact, or designate someone to contact, medical help immediately. If the individual received a bite from a poisonous snake, the sooner they receive medical treatment the better.

Before medical help arrives, there are some first aid steps that can help stabilize the victim. Apply a pressure immobilization bandage and keep the person calm and as still as possible until medical help arrives. Avoid washing the bite area because any venom left on the skin can help identify the snake. DO NOT apply a tourniquet, cut the wound or attempt to suck the venom out.