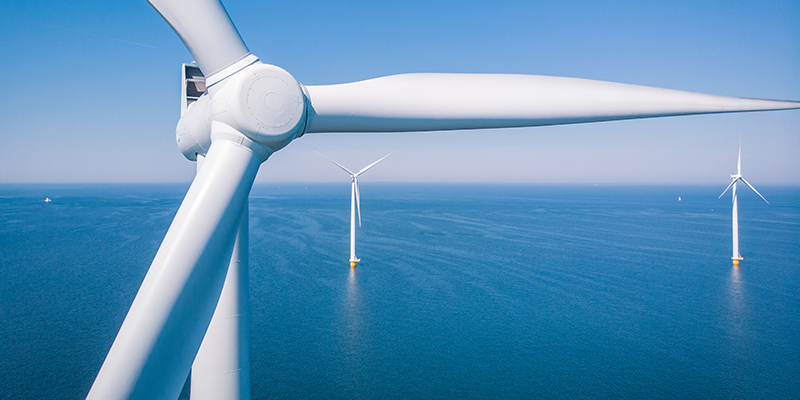 The tremors of COVID-19 have rippled throughout the energy sector…

Spending in upstream oil & gas has reduced by 32% YoY and investment cuts could be steeper than in 2015.

Goldman Sachs believes the sharp downturn will speed up the energy transition. In turn, this will create 15-20 million new jobs and $16 trillion of infrastructure investment by 2030.

While hydrocarbons have been lucrative, green energy is growing as a safe investment. Researchers have found that green firms achieve better annual returns and reduced volatility.

As investment in green projects increases, society and business will benefit. We will see economies of scale reduce costs, increase innovation and create jobs all over the world.

Below is an outline and links to the different sections:

In their latest Global Renewables Outlook, IRENA predicts the following:

There is also positive news for workplace diversity. IRENA estimate the current balance of gender participation to be 35% female in wind jobs.

By comparison, the conventional energy field is just 22% female. This will have a benefit to sector innovation, productivity and business performance.

Which renewable energy jobs are in demand?

A large proportion of these new roles will be in disciplines transferable from other energy sectors, including:

Many roles will be new and need new skills and technology. There will also be scope for displaced workers to retrain. This could mitigate the impact of a relative decline in jobs within oil & gas. 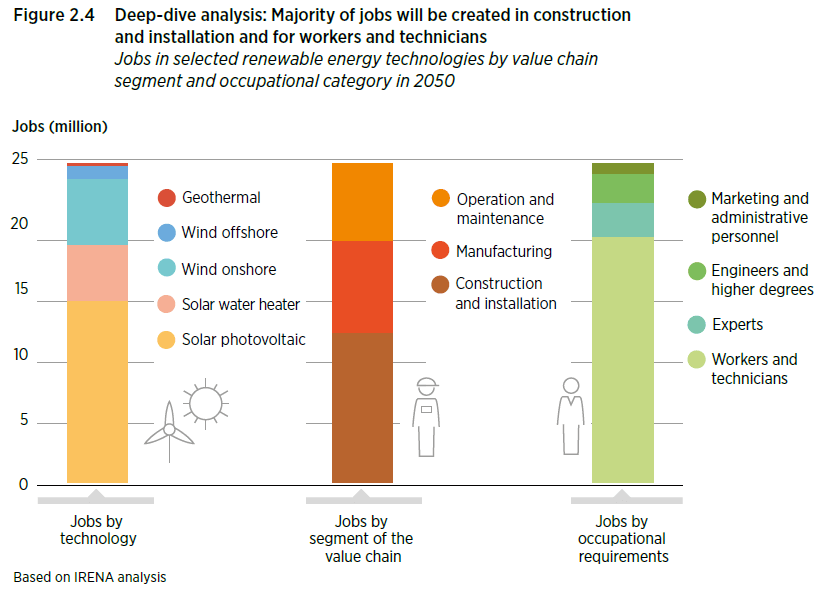 Which regions will create the most renewable energy jobs in the future?

IRENA anticipate the majority of jobs to be created in Asia by 2050, with over half of all energy professionals located in the region. Solar and wind will be the most populated sectors. Bioenergy will be a driver of job creation in Southeast Asia and emerging markets like Latin America and Africa. Wind and hydro will be popular sectors in Europe. 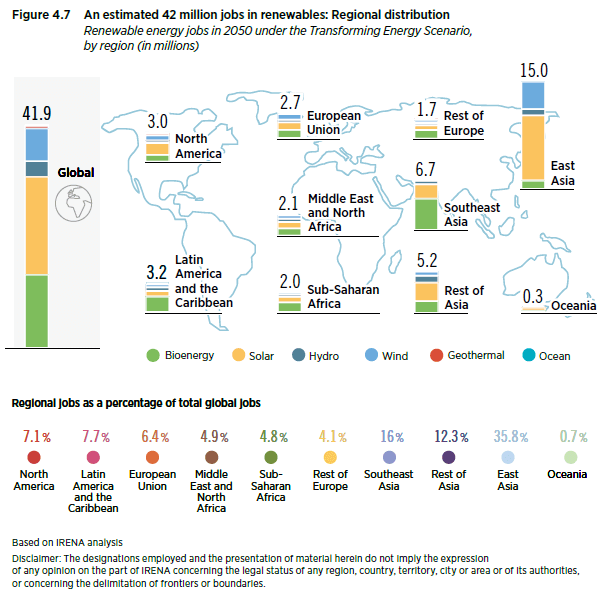 What is driving the increase in offshore wind farm projects?

While most current wind installations are land based, offshore investment is increasing. Spending could even overtake offshore exploration and production by the end of the decade.

Currently, offshore wind is only 10% of offshore E&P but growing interest from Big Oil could change that. The IEA predict that spending in offshore wind will increase by 13% a year and become a $1 trillion business by 2040.

This is driven by several key factors:

What risks are projects in the wind sector facing?

A key factor in the wind sector reaching its potential will be access to talent.

In particular, the recruitment, training and mobilization of expertise to emerging markets is crucial. We expect a large demand for experts from Europe, particularly the UK, Denmark, and Germany.

Over reliance on expatriate talent could also prevent successful delivery of projects. Operators must ensure that they also engage and train local communities. This will help maintain workforce levels, build domestic expertise, and develop political goodwill.

Which offshore wind jobs are in demand?

Increasing investment in offshore wind will create a buoyant job market for technicians and engineers. We are seeing a lot of demand for the following roles:

Airswift are working with several developers, contractors, and consultancies to hire for permanent employees and contractors with these skill sets.

What is the size of the offshore wind market in Asia?

Although 1,500GW of technical offshore wind potential is in Asia, only 0.4% is operational at present. A key limiting factor so far has been the relative lack of government support compared to Europe.

Could this be changing?

Asia Pacific was the destination for 50% of new wind project installations in 2019 and capital spend surpassed $10bn. Asia spent almost double the amount of Europe as it rapidly scales its wind capacity. 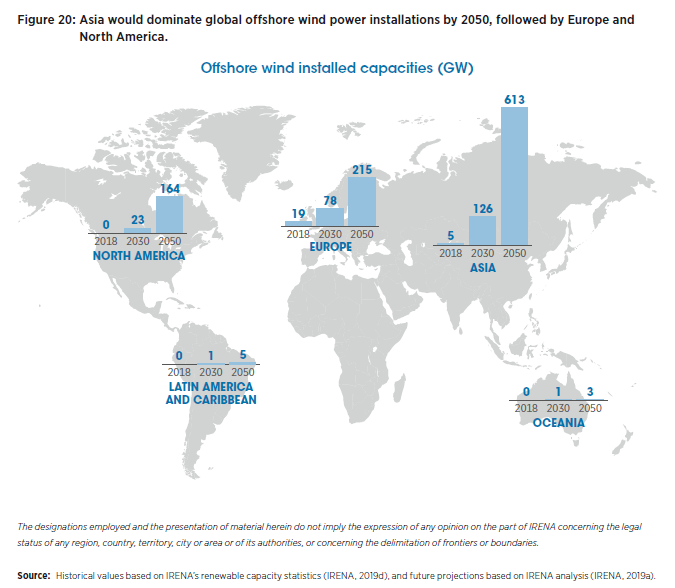 Below, we provide a brief outline of the top 10 Asian offshore wind projects in the pipeline.

China has more than 1,000 GW of technical potential for offshore wind, thanks to a coastline over 18,000km long. In 2018, China added 1.6 GW of offshore wind capacity, the most of any country.

Most projects are led by state-owned energy companies. Collaborations with CHN energy and SPIC saw European firms EDF and Equinor enter the market in 2019.

A $600m project expanding on the first foreign-backed wind farm in China, delivered in December 2019. The first project, the 300 MW Dongtai IV wind farm, was a joint venture between EDF and China Energy Investment Corporation. Phase two, also known as Dongtai V, will add 200MW of power off the coast of Dongtai in Jiangsu province.

Indonesia has prioritized renewable energy legislation as it aims to pivot from coal. Due to its volcanic geology, the country has great potential in geothermal energy. It also has an estimated total potential for onshore wind energy of 9.3 GW.

The Indonesian government has targeted 1.8 GW of installed wind capacity by 2025.

Local projects such as the 75MW Sidrap Wind Farm will be essential to government targets. Indonesian fabrication yards will play a key role in global projects too. Yards in Batam and Karimun will support many projects with fabrication scopes for steel foundation jackets, electrical sub stations and suction piles.

Japan aims to install 4 GW of capacity by 2040, generating 7% of total electricity generated. The IEA estimates that Japan has the technical potential for 9x as much power generation. The main limiting factor is the number of shallow areas available.

Harnessing deep waters of over 60m could overcome this limitation. Innovations in floating turbines, such as in the 3.2MW Hibiki project, could be vital but costs are high. As floating turbines are an early technology, costs will reduce over the next decade. The Japan Wind Energy Association are expecting 18 GW of floating offshore wind turbines to be installed by 2050.

Japan has a long history of maritime, manufacturing, R&D and technological innovation. This has not yet been leveraged to executing large offshore wind projects. Project management, coordination and installation expertise may need to be recruited from abroad.

Government policy could be key to developing the Japanese wind sector. In particular, relaxing immigration policy and encouraging joint ventures with international firms.

The Akita Offshore Wind Farm Corporation is developing a 54.6MW farm to be located near Akita Port. MHI Vestas has been selected as the manufacturer of the 13 turbines. A nearby project in Noshiro Port will use another 20 turbines produced by MHI Vestas. Commercial operations will begin in 2022 and will power 130,000 homes.

A larger development is also in the early planning stage to be located North of Akita Port. This project, led by Obayashi Corporation, has the potential to produce 455MW of power. Siemens Gamesa is the preferred turbine supplier and the project is due to start in 2024.

A development of two offshore wind farms in Kamisu City, Ibaraki Prefecture. Each project will produce 94MW of power. It is expected that the Kashima North project will be online sometime in 2020.

South Korea is the largest offshore wind market outside the EU, the United States and China. With shipbuilding and maritime expertise, South Korea is attractive for commercializing floating wind.

Many of these projects will be fabricated in the local yards of Ulsan and Geoje Island and build on their wealth of talent and expertise in fabrication.

The Green New Deal aims to create 133,000 jobs over the next two years by transitioning away from fossil fuels. The Renewable Energy 3020 Plan has set targets to produce 13 GW of offshore wind by 2030 and 25 GW of capacity by 2040. This would amount to 10% of Korea’s total electricity delivered by offshore wind by 2040.

This $8.4m offshore wind farm will be built 20 km off the southern city of Yeonggwang over three phases. When the final phase is complete in 2025, it will have an installed capacity of 2500 MW.

The first phase began in January 2019, with a project to install 20 Doosan Heavy Industries 3 MW turbines.

The final phase will be the largest and will add 2 GW of capacity. This will produce enough electricity to power approximately 1.4 million households. At $8.4m in value, the project is second only to Ke Ga Offshore Wind Park as the largest offshore wind project in Asia

The estimated value of the project is around $2.6 million, and it will be fully operational in 2025.

The Green Investment Group (GIG) invested $1.5m to develop a 1.4GW complex off the city of Ulsan. The project will be completed over three phases, with the first 400MW of power coming online in 2022.

Project commissioning began with the installation of Korea’s first floating LiDAR. The LiDAR will collect essential data related to wind speed and direction over a two-year period. This data will be used to evaluate the impact on the local ecosystem, environment, and fishing industry.

Taiwan is aiming to increase offshore wind capacity to 5.5 GW by 2025 and 10 GW by 2030. Bolstered by attractive wind conditions, Taiwan aims to generate 25% of energy from renewable sources by 2025.

Led by the Danish innovator, Ørsted, phase one of this four phase project is due for completion in 2020.  Construction of the onshore substations and transmission infrastructure is already underway.  The establishment of the project structures will then begin at the end of 2021.

Changhua-1 and 2a wind farms are scheduled for commissioning in 2022, while the FID on Changhua 2b and 4 wind farms is expected in 2023.  The four Greater Changhua wind projects are expected to comprise the biggest wind-power complex in Taiwan.

The final development will have a total capacity of 2,400 MW. This would be enough green power to supply 2.8 million Taiwanese households.

Vietnam's National Power Development Plan VII has placed renewable energy at its center. This will be key to improving energy security and rural electrification levels. With coastlines of over 3,000 km and average wind speeds of 6-8mph, Vietnam has great wind potential.

The Global Wind Energy Council predicts that 4 GW of wind capacity will be added by 2028.

According to BP, the largest year on year increase in Asian wind production was in Vietnam, growing by 58.2%. This was supported by a 3,583% increase in solar production.

A key driver of this growth has been the generous offshore Feed-in Tariff (FiT) of 9.5c/KWh introduced in 2018. By comparison, neighbouring countries had reduced or removed FiTs for wind energy. Other drivers include tax exemptions to encourage investment.

The FiT has been designed to increase the number of projects and has a short cut-off of November 2021. The short timeline has encouraged the fast-tracking of projects to beat the deadline.

This project is a joint development between Mainstream Renewable Power, Phu Cuong Group and GE Energy Financial Services. The cooperation will see the partners develop the 800MW wind farm with an expected cost of $2bn. The location will be within the intertidal zone along the Mekong River Delta region.

Phase 1 of the project will feature 150-200 MW of wind generation. A feasibility study estimates 1,000-2,000 jobs will be created during construction, with 55 permanent jobs added during its 20-year operational life. Start-up is expected to begin in 2022 and will be followed by phase 2, which will add 600 MW of offshore wind capacity.

Operating in shallow waters of 45m, this 3.4GW project will operate in an area of around 2,000 square km. Located 20km offshore Ke Ga cape, off the south-central province of Binh Thuan, the total project investment will be at least $12bn and delivered in five phases.

The first 600MW phase will feature 64 turbines, each with an individual capacity of 9.5MW. Vestas Wind Systems and Mitsubishi Heavy Industries will be the turbine manufacturers. The main operator on the project is Enterprize Energy and construction is expected to begin in 2021

Phase 1 will be powered by seven SG 4.5-145 turbines provided by Siemens Gamesa. There is potential for a second phase to add a further 30MW of power delivered by the same technology.

What are the key employment trends for the energy sector in 2021? We explore the findings from the Global Energy Talent Index

What renewable energy employment trends will we see in 2021?

Are you a hiring manager in the renewables sector? Review the sector’s 2021 employment trends using data from the Global Energy Talent Index 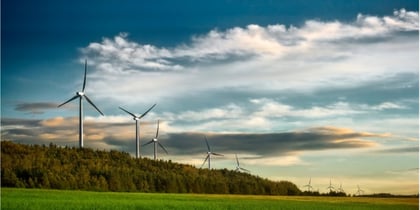 Brazil is a world leader in renewable energy job creation

The country has 83% of its electricity matrix coming from renewable sources. Find out opportunities and the key projects driving the economic recovery.