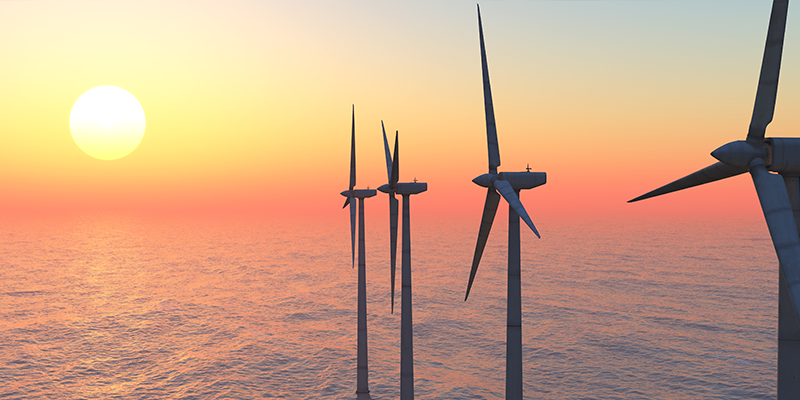 Europe can top 4GW for the first time and more than double offshore wind capacity additions seen in 2021, the best year ever for the global offshore wind industry. The ‘old continent’ is the world’s most mature region in the sector and has been a pioneer over the last decade.

The region was responsible for 50.4% of total cumulative global offshore wind installations, followed by Asia with 49.5% market share. European governments have set the target of 450GW of offshore wind by 2050 and 116GW between 2022 and 2026. To meet their goals and win the race toward a green future, governments, businesses, and investors must work together.

More than ever Europe now needs to tap into its massive wind energy resources. Speeding up the growth of wind is central to achieving energy security. And we need to do it with European technology. Europe must do everything to preserve our world-leading wind energy supply chain. Accelerate permitting. Have smarter wind auctions that factor in wind energy’s contributions to a robust, resilient and circular economy. And boost research and development.

We list 10 European wind projects of interest. There are 114 offshore wind projects slated for the next 5 years with a total value of $211bn.

Click the project names above to jump to a summary of each. Looking for a brief overview of the European offshore wind industry? Read on.

The leading market players are European and these pioneers have expanded globally. Key operators and asset owners include Ørsted, RWE and Vattenfall. The two leading manufacturers – Siemens Gamesa and MHI Vestas are also European.

Although the market for offshore wind in Europe is well established, it still has room to grow. New annual installations are expected to grow at 11-12 GW over the next five years. Falling auction costs and technological innovation increase the attractiveness of the offshore wind industry.

Several public finance institutions have sprung up to provide capital and manage risk. The European Investment Bank has provided finance and encouraged private investment as well.

The UK alone has set a target of 50GW of offshore wind installed capacity of which 5 GW will be floating wind, and Germany is aiming for 30GW. By comparison, the US target is 30GW by 2030. 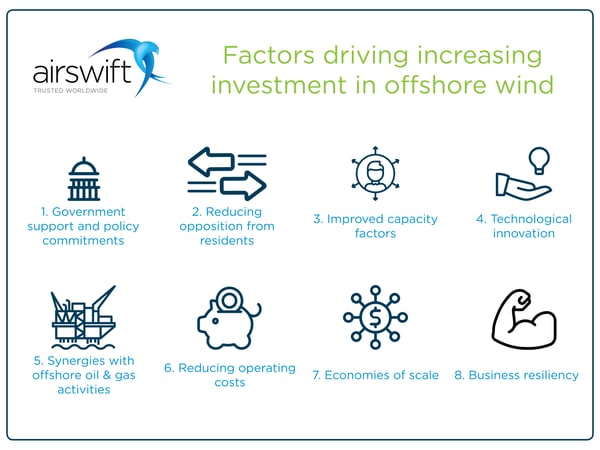 Which offshore wind jobs are in demand in Europe?

The increase in offshore wind turbine power along with project size is responsible for creating a growing demand for specialist talent.

Wind energy provides 300,000 jobs across 248 factories in Europe and contributes €37bn to EU GDP every year. In fact, IRENA is anticipating the number of global wind jobs to rise from 1 to 6 million between 2017-2050.

We are currently seeing a lot of demand for the following roles and skill sets.

Hornsea Two Offshore Wind Farm is the second phase of the Hornsea Zone. It is located approximately 89 km off the Yorkshire coast in the North Sea and adjacent to Hornsea One, the world's largest offshore wind farm.

The project will have 165 Siemens Gamesa 8MW offshore wind turbines and become fully operational in 2022, led by Ørsted. Once complete, Hornsea Two will have a capacity of over 1.3GW, providing energy to power more than 1.3 million homes.

Operated by Ørsted, the project will have a capacity of 1.4GW, providing power to well over 1.3 million homes. Hornsea Two becomes fully operational still this year. The wind farm will deliver 20% more annual output than those used for Hornsea One. With that, Hornsea Two will overtake the first project as the world’s biggest offshore wind farm.

The Dogger Bank offshore wind farm is a joint venture partnership between SSE Renewables (40%), Equinor (40%) and Eni Plenitude (20%). SSE Renewables is leading on the development and construction, and Equinor will operate the wind farm on completion and during its operational life.

The first phase, Dogger Bank A, is expected to be operational in 2023.

With 950MW of capacity, Moray East will power around 950,000 UK homes and generate sufficient electricity to save 1.4 million tonnes of CO₂ equivalent annually.

The wind farm will be operated by Ocean Winds in Moray Firth, 22km from shore, and is expected to be operational by 2022.

The power output of Triton Knoll Offshore Wind Farm constructed by RWE will be 857MW. The project will generate sufficient electricity to meet 800,000 homes each year.

Located in the Greater Wash area, approximately 32 km off the coast of Lincolnshire, the wind farm will feature up to 90 turbines with water depths between 18m and 24m. The power will come ashore at a new grid substation to be built at Mumby.

Crown Estate approval was given via the second round of the offshore wind development process. 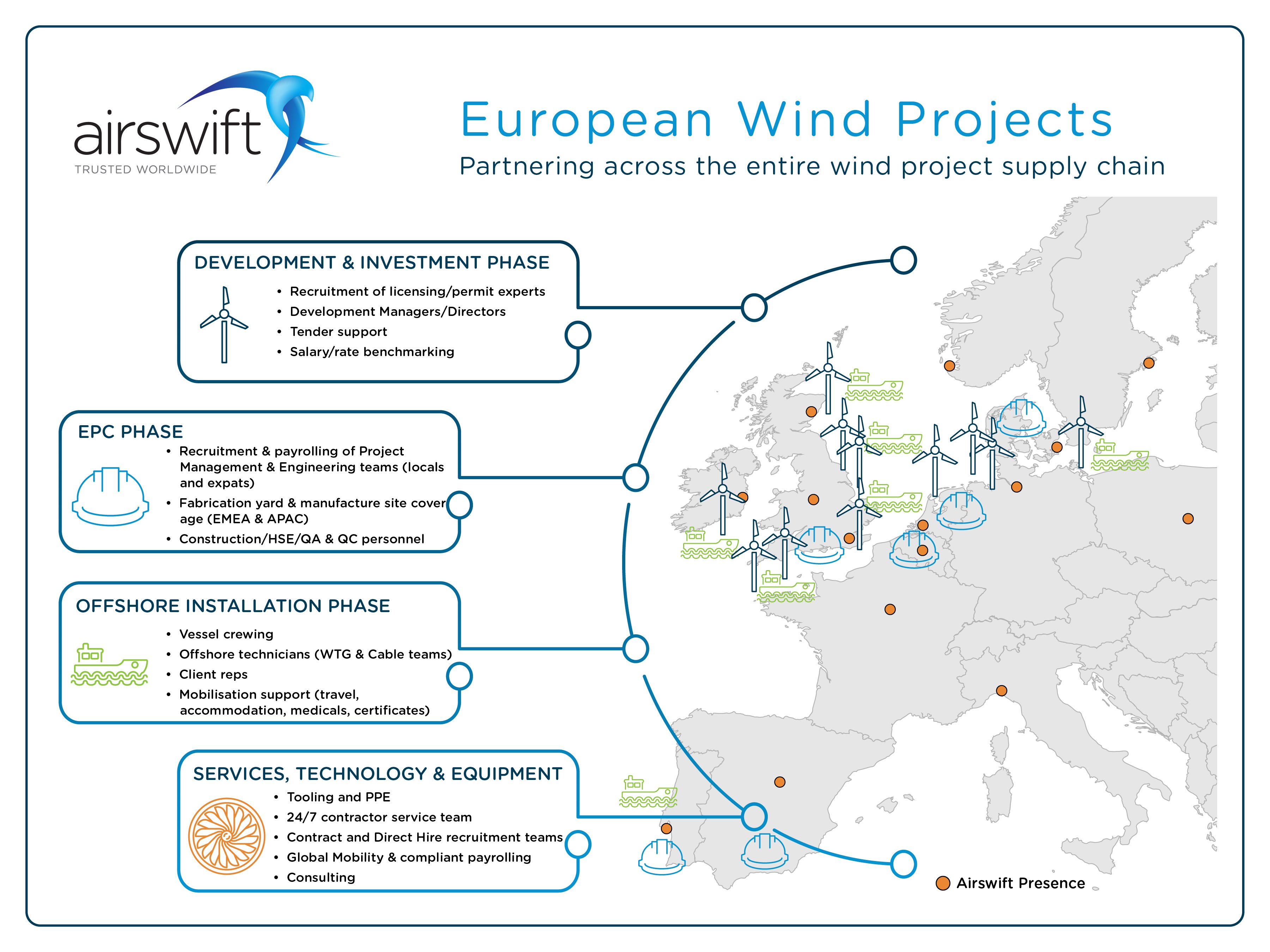 Airswift partners with companies and professionals throughout the offshore wind supply chain.

Hollandse Kust Offshore wind farm is a development in the Netherlands that can be devided into Kust Noord, Kust Zuid, and Kust West.

The project is expected to be operating in 2030 and features energy storage and flexibility solutions, including the production of green hydrogen from offshore wind.

Turbines to be used will have capacities of 11MW and maximum tip heights of 251m. Water depths at the site vary between 18-25 metres. Operated by Vattenfall, the start-up is expected in 2023.

Transmission system operator TenneT will construct two offshore platforms with two grid connections. A tender for the permit to develop the sites will be issued by the Dutch Government. The project is predicted to be in operation in 2025.

The German TSO 50Hertz will connect the project to the local grid with two new high voltage cables. In 2019, MHI Vestas was selected as the preferred turbine supplier for the project.

It will be the first offshore project to feature their V174 turbine. MHI Vestas will deliver and install the turbine in 2022/2023.

A 495MW offshore wind farm located off the coast of Co. Wicklow in Ireland. The project is the second phase of development at Arklow Bank.

An EDF project, consisting of 71 gravity base foundations and a capacity of 500MW. The project will be located in the English Channel, 13km off the coast of the Haute Normandie region.

Comprising of up to 83 turbines in water depths of between 24m and 31m, the project is expected to be operating in 2023 with a total capacity of 498MW.

Spain’s Iberdrola approved a final investment decision on this project in March 2020.

With a total installed capacity of 496 megawatts (MW) from 62 turbines each generating 8 MW of power, the wind farm will produce energy enough to power 835,000 people. The project will start operations in 2023.

The UK can drive the record-high capacity additions in Europe with three projects still in 2022. Read about challenges and opportunities in the region. 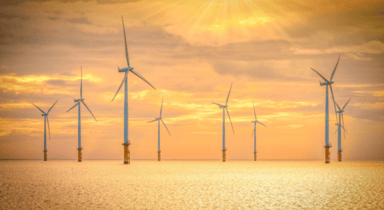