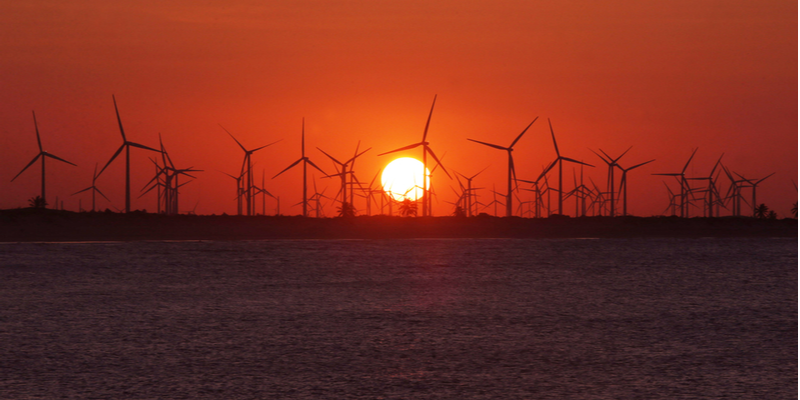 Good winds are blowing strong in northeastern Brazil and the sector has accumulated record power generation. This has helped to reduce the consequences of the water crisis currently facing the country — due to the dry rains — and also to stimulate the economic recovery, creating jobs.

Brazil occupies seventh place in the global ranking of the Global Wind Energy Council (GWEC) with 19GW of installed capacity. To get an idea of growth, the sector had less than 1GW installed in the country a decade ago and is currently the second-largest source of energy in the country, accounting for 10% of the electricity matrix.

According to the Brazilian Association of Wind Energy (ABEEólica), the expectation is that by 2024 Brazil will have at least 30 GW of installed wind energy capacity, considering only auctions already held and contracts signed. New auctions will add more installed capacity for years to come. 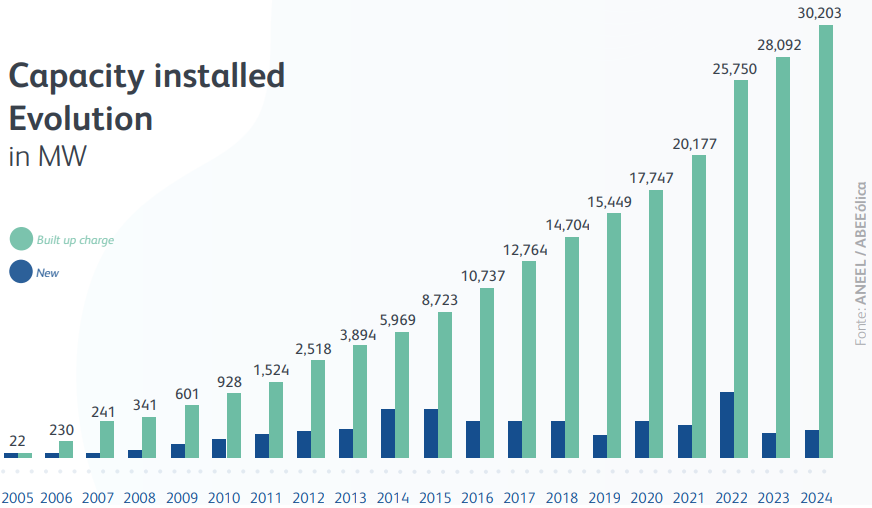 Figure 1: Evolution of Installed Capacity in MW from 2005 to 2024. The future data presented in the chart above refer to contracts made possible in auctions already held and in the free market. Source: Brazilian. Electricity Regulatory Agency (ANEEL) and ABEEólica

Northeast has 80% of Brazilian wind farms

With the lack of rain, reservoir levels are low, and the activation of thermoelectric plants is necessary, which further increases the price of energy.

For this reason, specialists claim that diversifying Brazilian energy sources is essential since the country is abundant in natural resources and has great energy potential.

The favourable quality of Brazilian winds for wind power generation stands out globally. Brazil has a capacity factor (wind productivity) above average, as you can see below.

The Northeast accounts for 80% of Brazilian wind energy farms. This is because the region has more constant winds, has a stable speed and does not change direction very often.

The state of Rio Grande do Norte is the largest producer of wind energy in the country, and installed capacity is expected to grow in the coming months. The wind is more intense from June to December, coinciding with the months with less intensity of rain.

The Secretary of Economic Development of Rio Grande do Norte, Jaime Calado, said:

It will be a record investment. Last year it was around R$ 7 billion and this year it will exceed R$ 12 billion.

The great potential of the Brazilian energy and electrical matrix

Clean and renewable energies account for 48% of Brazil's total primary energy supply, while the world average is 14%.

Wind, solar, hydro and biomass sources account for 85% of the electricity matrix, a level almost without equivalence in the world. Despite this, Brazilians feel the heavy cost of tariffs in their pockets. 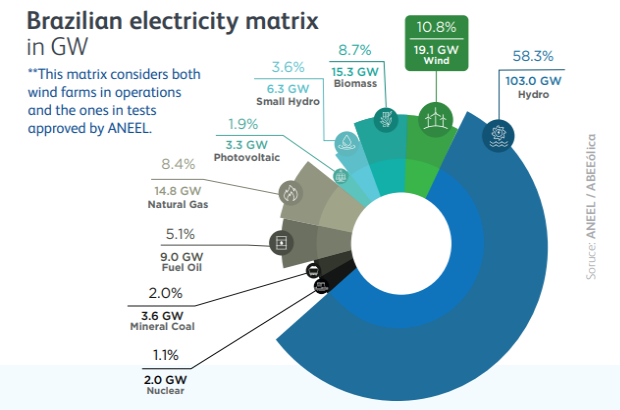 Is electricity expensive in Brazil?

According to a study by Global Petrol Prices, carried out in 2019, energy in Brazil is the 37th most expensive in the world, in a ranking of 110 countries. The cost is US$ 0.18 per Kwh. Belgium, Denmark, Germany and Bermuda have the highest fares, with more than US$0.30 per kWh.

Although these data provide an important panorama of the electricity sector, they do not completely answer the question: is electricity expensive in Brazil? After all, comparing prices between countries is always a hard challenge, given the differences in income, energy matrix, exchange rates and broader economic policies.

Wind jobs in demand in Brazil

In 2020, the sector had around 260,000 workers in Brazil, according to a global survey by GWEC Market Intelligence. The country was behind only China, which generated 550,000 jobs in the sector.

Wind energy's growth may be fundamental not only for the environment but also for the country's post-pandemic economic recovery.

We currently partner with many companies in the industry that are in demand for the following roles.

Looking for your next job in wind power? If you fit into any of these roles, please contact us.

There are 53 wind projects onshore planned over the next 5 years with a total investment of $12bn. The Rio Grande do Norte (5bn), Bahia (4bn), Piauí (2bn) and Paraíba (1bn) are the states investing the most in onshore wind energy projects in the next 10 years.

The park has started commercial operations of phases 1 and 2 in June. The 716 MW facility, with 230 wind turbines will generate over 3.3 TWh of clean energy per year.

Made up of 15 wind farms located in the municipality of Santa Luzia, in the interior of Paraíba, the Chafariz Wind Complex will have an installed capacity of 471MW of clean energy.

The project is under construction and is expected to start operating in December 2022 with 136 wind turbines.

The Chafariz Complex will be an expansion of the Santa Luzia Complex already in operation in the region. Together, they will be Neoenergia's largest wind farm in Latin America. Neoenergia is a company of the Iberdrola group.

The Alto Sertão III Wind Complex Phase A involves the construction of 26 wind farms with an installed capacity of 438MW.

Operated by Renova Energia in Caetité, Igaporã, Pindaí, Licínio de Almeida and Ura, in the state of Bahia, the project will have 155 turbines and is expected to start in 2022.

Located in the cities of Currais Novos and São Vicente, in Sertão of Rio Grande do Norte, the Anemus Complex is 2W Energia's first wind farm.

The project has 3 wind farms and 33 wind turbines that together will have an installed capacity of approximately 139MW.

It is expected to start operating in the first half of 2022.

In Brazil, wind energy is still an unprecedented source at sea. But, according to Brazil's environmental regulator (Ibama), there are 20 projects in the licensing phase that may come into operation in between four and six years.

Together they would have 42GW of power. The generation of renewable energy is on the radar of multinationals such as Equinor, Neoenergia, EDP and Engie. The offshore wind potential in water depths of up to 50 meters is 700GW.

Find out the 20 projects distributed in seven Brazilian states.

This is the largest project in terms of power and the number of turbines. With a capacity of 3GW, the wind complex operated by Neoenergia - a company of the Iberdrola group - will have four 750MW sections and up to 200 turbines.

With a capacity of up to 720MW, this project will have 60 wind turbines of 12MW each. Asa Branca is developed by Eólica Brasil.

In addition, 11MW turbines will be installed on breakwater piers. The project is located 14km from the ports of Pecém and Mucuripe.

Development of a 1.2GW offshore wind farm. Operated by BI Energia, the park is planned to have 100 turbines of 12MW each.

The project, in Bahia, 200 meters from the coast and operated by Sowitec, is the smallest in the number of turbines and power among the 20 underway. Nova Energia anticipates one turbine with a capacity of 3.4MW.

The project foresees 1,440MW of capacity, from the installation of 144 turbines with 10MW each.

Development of a 999MW wind farm with 74 wind turbines of 13.5MW each. The project will be operated by Ocean Winds, a 50-50 joint venture between EDP Renewables (EDPR) and ENGIE.

The project, by Bosford Participações, will have 93 turbines generating 1,395MW in total.

The Ventos do Atlântico project, operated by Ocean Winds, is the second largest in the country, with 371 wind turbines and just over 5GW of power.

Ocean Winds is a 50-50 joint venture between EDP Renewables (EDPR) and ENGIE.

Operated by Neoenergia, the Maravilha project is located close to the oil and gas production infrastructure operated by Petrobras. Neoenergia is a company of the Iberdrola group.

With a total capacity of 3.8GW and 320 turbines, the Aracatu complex will be developed by Equinor.

Development of a 2.48GW offshore wind farm located 8.2 km off the coast of Rio Grande do Norte. Operated by Internacional Energias Renováveis, the project foresees the installation of 207 turbines with a capacity of 12MW each.

Operated by BI Energia, this offshore wind farm will have 624MW of capacity with 52 turbines of 12MW each.

The project is the development of an Offshore Wind Farm with 2.01GW of capacity, which will be operated by Ocean Winds (a 50-50 joint venture between EDP Renewables (EDPR) and ENGIE). In total, 149 turbines with 13.5MW each are planned.

Alisios Potiguares, of Bosford Participações, will comprise 123 generators of 15MW each.

With 6.5GW of power, Ocean Winds' project (a 50-50 joint venture between EDP Renewables (EDPR) and ENGIE) may be the largest in the country. state and country. The project will have 482 turbines.

Development of a 702MW offshore wind farm located 6km off the coast of Rio Grande do Sul. Operated by Ocean Winds — a 50-50 joint venture between EDP Renewables (EDPR) and ENGIE — the project will feature 52 turbines with a capacity of 13.5MW each

This wind farm owned by Bosford Participações has an installed capacity of 1.2GW.

Airswift is committed to supporting the energy transition. We have over 300,000 Brazilian candidates available to work in the wind energy sector, and our dedicated team can support clients throughout the entire wind project lifecycle onshore and offshore.

From our office in Brazil, strategically positioned to connect talent to the biggest energy projects, Airswift has hired over 4000 Brazilians in the last 15 years.

Register your interest in wind energy jobs in Brazil

Currently, 30,000 Australians are working in renewable energy. Are you looking for your next job? Find key projects, jobs in demand, and the main challenges. 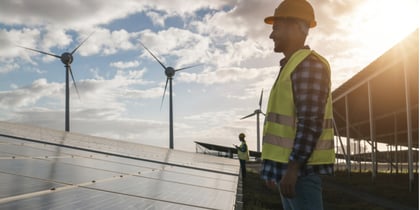 Today, half of electricity comes from solar and wind energy in Denmark. Find out key projects, jobs in demand, and why Denmark is a global leader in the sector. 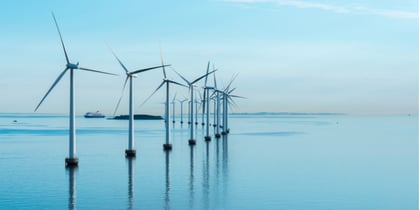 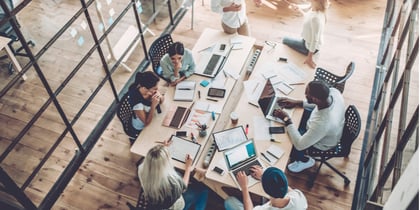