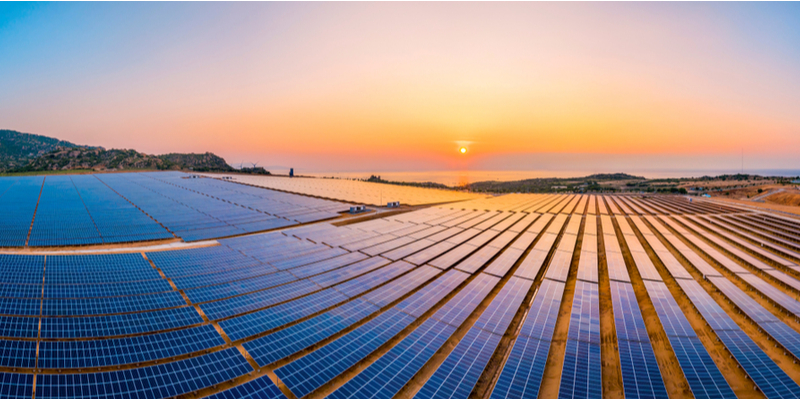 According to Rystad Energy, the installed capacity of renewable energy in the Asia-Pacific region will jump from 517 GW in 2020 to 815 GW by 2025. Solar energy will lead this growth, whose regional capacity will nearly double from about 215 GW to 382 GW in the same period.

Before the Covid-19 pandemic, energy transition was already on the rise in Asian countries. Clean energy infrastructure investment in the region has been high in order to reduce carbon emissions with cheaper technology and economies of scale.


The Renewable Energy Status Report (Asia and Pacific) shows that solar power capacity has more than tripled in the region in recent years. 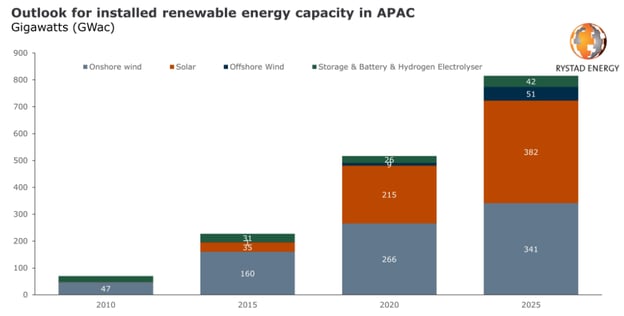 Cost-competitiveness of solar energy in Asia

Technological advances and lower costs of capital have propelled renewables into the mainstream energy market. The boom of green investments in Asia is visible, and the continent aims to dominate the global renewable energy stage in terms of new capacity addition, technology development, and energy demand.

Based on solar PV’s competitive costs, it could become the “new king” of world electricity markets, driving the rapid growth of renewable power over the next decade.

Renewable 2020 Global Status Report, from REN21, indicated that one of the main reasons for reducing solar costs was a ramp-up in manufacturing in recent years due to optimistic expectations about global demand growth (particularly in China). It held down prices for polysilicon, wafers, cells and modules.

Innovations and improvements in design and operation as the Boom of Green Investments in Asia is visible, and the continent aims to dominate the global renewable energy stage in terms of new capacity addition, technology development, and energy demand.o helped to reduce operations and maintenance (O&M) costs. Today, solar projects offer some of the cheapest costs of electricity ever seen.

The figure below shows that renewable electricity costs are higher than electricity prices, on average, in only two of the ten regions (the Middle East and North Africa region and the Rest of Europe). In all other regions, renewable costs are at least 20% lower than current electricity prices. This shows the potential for renewables to reduce the prices of electricity. 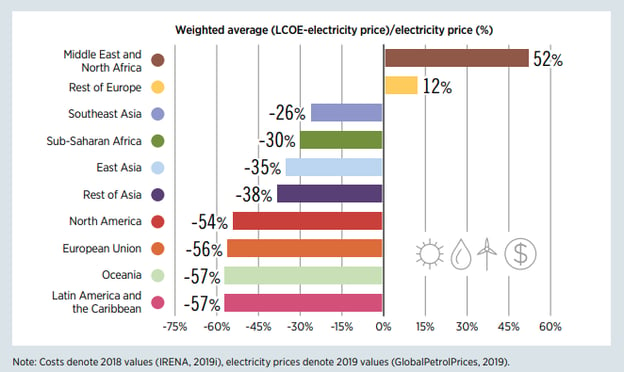 Jobs in demand in the solar industry

There are about 11.5 million renewable energy workers today, and solar power projects accounted for 3.8 million of them, nearly one-third of the total number. Currently, the world's leading producer of solar photovoltaic (PV) equipment as well as the most extensive installation market, China accounted for 2.2 million jobs in 2019.

Globally, jobs in renewable sources will reach 42 million in 2050. The largest creator of these jobs will be Asia, opening vacancies in manufacturing, installation, operations and maintenance. The solar sector will account for half of all renewables jobs on this continent.

East Asia will provide 36% of new renewable energy jobs created. To a large extent, investment in installations accounts for this result, driven by ambitious targets for the electricity sector. The rest of Asia will create 28% of jobs. 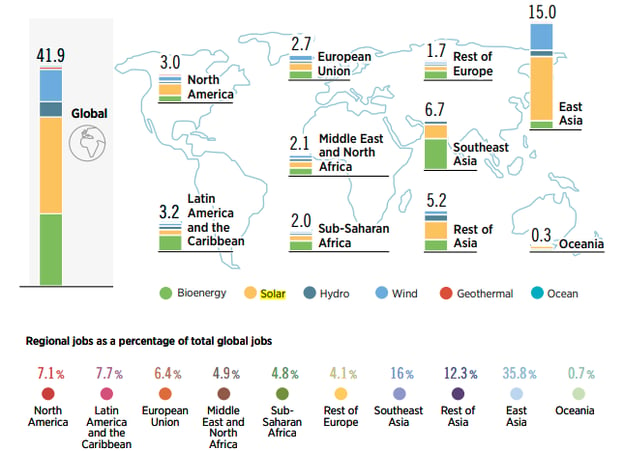 What are the skills needed?

A frequent question in the renewable sector is about the skills needed to fill clean energy jobs. It is important to note that most of the abilities and disciplines could be transferable from other sectors of the industry.

Many of the employees formerly working in oil and gas now distribute, construct and maintain solar panels. There are plenty of opportunities for professionals who want to switch to clean energy.

However, switching the workforce from fossil fuel extraction and burning to renewables requires training and a new mindset. 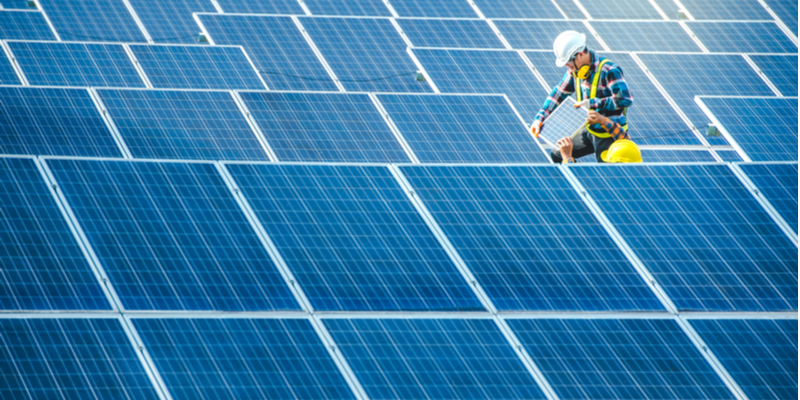 Airswift is already working with key companies and several developers, contractors, and consultancies to hire employees and contractors with these skill sets.

If you are looking for your next role in this sector, we can help with your job search.

Southeast Asia is one of the fastest-growing regions in the world in terms of electricity demand, rising by more than 6% annually over the past 20 years on average. But the economic impact of the Covid-19 pandemic is reducing electricity demand.

According to the Electricity Market Report, from the IEA (Southeast Asia), the region is also one of the few in the world where a coal-fired generation has been expanding. Close to 20GW of new coal-fired generating capacity are in construction, mostly in Indonesia, Vietnam and the Philippines.

To revive the pandemic-hit economy and reduce carbon emissions, the Association of Southeast Asian Nations (ASEAN) governments have laid out a five-year sustainability plan under the second phase of ASEAN Plan of Action for Energy Cooperation (APAEC) 2021-2025.

In this ambitious project, ASEAN energy ministers agreed to set a target of 23% share of renewable energy in total primary energy supply in the region.

Studies in the region

One of the ways of reaching the new target is regional interconnection and trade. ASEAN has a project to develop multilateral power trade, which was supported by the 2019 IEA study Establishing Multilateral Power Trade in ASEAN. The study recommended clear actions to establish cross-border power trade in the region.

The Lao PDR-Thailand-Malaysia power integration project is one example of regional cross-border power trade. The project has enabled 100MW of power transfer from Lao PDR via Thailand to Malaysia. Work is already underway to extend the framework to include Singapore.

Vietnam, Thailand, the Philippines, Malaysia and Indonesia represent a share of 84% of the total installed renewable energy capacity among the Southeast Asian countries. 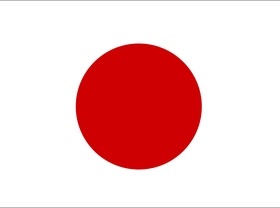 Many Japanese cities are using distributed energy and microgrids to restructure their energy infrastructure. Over five years, 10 projects with a total value of $3bn will produce energy in the region.

On an island in Nagasaki Prefecture, Ukujima, Japan, this solar park has a power capacity of 400MW (AC). The project will cover roughly 25% of the island.

The power plant will be connected via high voltage submarine cable to the electricity grid at Ainoura S/S which is approximately 65 km away.

The construction commenced in 2019 and is expected to be completed by 2023. According to the Photovolt Development Partners, which is developing the project, it will be the largest photovoltaic power plant in Japan.

Construction of a 162MW solar PV plant at Miyagi prefecture of Japan. The solar farm will generate up to 175,000MWh of clean renewable energy per year, enough electricity to meet the demand of nearly 35,000 Japanese homes.

At the peak of its construction, Amateras Shiroishi Solar Project is expected to create over 200 jobs. Operated by Vena Energy, the project will start this year.

Development of a photovoltaic solar project with a total capacity of 133MW.

Operated by Thai Solar Energy Company LTDA and Sino-Thai Engineering & Construction, the solar plant will be located on 332.8 hectares of land in Onikoube, Miyagi Prefecture, Japan.

The plant is scheduled to go into operation by December 2022. 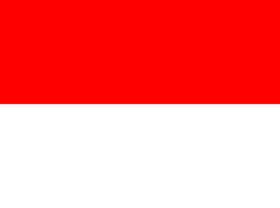 Indonesia is expected to become the fourth-largest economy in the world by 2040. Coal dominates the Indonesian power mix, supplying around 60% of its electricity in 2019.

There are 18 solar projects slated for the next five years in the region with a total value of $2bn.

Development of a 145MW floating photovoltaic solar power project will be built on 225 hectares of surface area on the Cirata Reservoir in West Java province, Indonesia. It will be carried out in two phases.

The project will install 700,000 floats to the bottom of the 6,000-hectare reservoir, which already provides power for a 1GW hydroelectric plant. The project will also include an onshore high-voltage substation.

The Cirata Floating PV Power Plant will produce energy enough to power 50,000 homes and will contribute to the creation of up to 800 jobs. Developed by Masdar, the project is slated to start at the end of 2022.

Clean energy in Thailand has been increasing in recent years, from around 12% in 2017 to almost 20% in 2019, consisting of hydropower, biomass, wind and solar PV. The electricity generation has continued to grow by about 2% annually over the past few years.

The renewable energy target for electricity (excluding imported hydro) is set at 29% of total generation by 2037, with an additional 6% energy efficiency target.

Thailand intends to build 16 solar farms with a combined capacity of more than 2.7GW in nine of its hydroelectric dam reservoirs. Combined, the Thailand projects will more than triple the global floating solar capacity which is currently around 1.3GW.

All projects will be built by the governmental utility Electricity Generating Authority of Thailand (EGAT). Thailand aims to develop its capacity for floating PV installations, particularly on dams.

The first two projects, located in the Northeast, including 45MW of contracted capacity at Sirindhorn Dam, and a 24MW project at UbolRatana Dam.

The Thai government is also working on tests for lithium-ion battery energy storage with two big projects standing at 22MWh and 16MWh capacity. 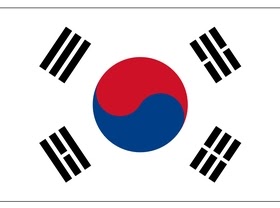 That represents a major change in the energy mix, which currently depends on coal. The country’s electricity generation capacity is projected to surge to 185.3 gigawatts by 2034, from 120.5 gigawatts this year.

There are three solar projects slated for the next five years in South Korea with a total value of $4bn.

Construction on the facility is planned to start by the third quarter of 2021, to kickstart operations in 2023.

The government estimates that approximately 4.6 trillion won ($3.9 billion) of private funds will be invested in the project. 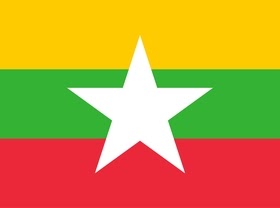 To support economic recovery in post-Covid-19, Myanmar aims to generate 14% of the country’s electricity needs through renewable energy.

Last year, the country awarded 30 solar projects to companies mostly from China. The projects could generate a total of 1000MW of energy.

There are nine solar projects slated for the next five years in Myanmar with a total value of $3bn. Sagaing, Mandalay, and Magway are the regions investing the most in solar power projects.

A project to develop several solar plants throughout Myanmar, with a combined capacity of 1GW, under the tender issued by the Ministry of Electricity and Energy (MOEE). The start-up of the solar power projects is expected this year.

This project is the first solar plant in Myanmar as well as the largest single-scale ground solar plant in Southeast Asia. The project will be located in an 850-hectare land plot in Minbu city in the Magway region.

The 220MW solar power plant will be developed in four phases. The first three phases will have an installed capacity of 50MW each, while the last phase will be 70MW.

Electricity generated from the plants will be sold to the Myanmar government under a Power Purchase Agreement (PPA) for 30 years. The start-up is predicted to 2022.

The National Renewable Energy Plan (NREP) 2020–2040 targets to have at least 34GW of renewable energy installations by 2040 in the country.

Seven solar projects are slated for the next five years in the region with a total value of $560m.

Development of a 100MW solar power plant. Initially, the project would be located in Pasuquin, Ilocos Norte. But it was relocated to Tanap village, Burgos and it will be expanded to neighbouring Bangui.

Airswift is the agency of choice for world-leading renewable energy businesses.

With over 60 offices worldwide, 800 employees, and 7,000 contractors, we have a dedicated team of specialist recruiters in renewable disciplines. They help companies and candidates by providing workforce solution.

Looking for a renewable energy job in Asia?